Singapore’s Sir Ludvig Kong Yeow Onn, 17, was among 46 child representatives from 21 Asian countries who came together to advocate for the rights of the region’s children at the first Asian Children’s Summit, held in Bangkok, Thailand, from 26 to 29 November 2019.

The Summit was held in commemoration of the 30th anniversary of the United Nations Convention on the Rights of the Child (UNCRC), the most widely ratified international human rights treaty. Asia-Pacific is home to around half the world’s children, defined as those aged 18 and below, according to Unicef.

The Summit was organised by Child Rights Coalition Asia and its partners.

Over four days, the child delegates took part in learning sessions and focus groups organised around four key themes: violence against children, children on the move, children’s right to a healthy environment, and children’s rights in the digital environment. Thanks to the facilitators, the topics were made both accessible and engaging.

The experience introduced him to the UNCRC, and helped him understand why it was so important, said Ludvig, whose adult mentor was Tan Shu Hao, a social worker from JYC @ Children’s Society.

The children participated in a goal-setting exercise on how they wanted their rights to be better protected, outlining #TheAsiaIWant. They also presented their countries and cultures to other participants at a market booth, with Ludvig sharing snacks like pineapple tarts and murukku, and information about Singapore’s places of interest. He also talked about the Society’s community drop-in centre. 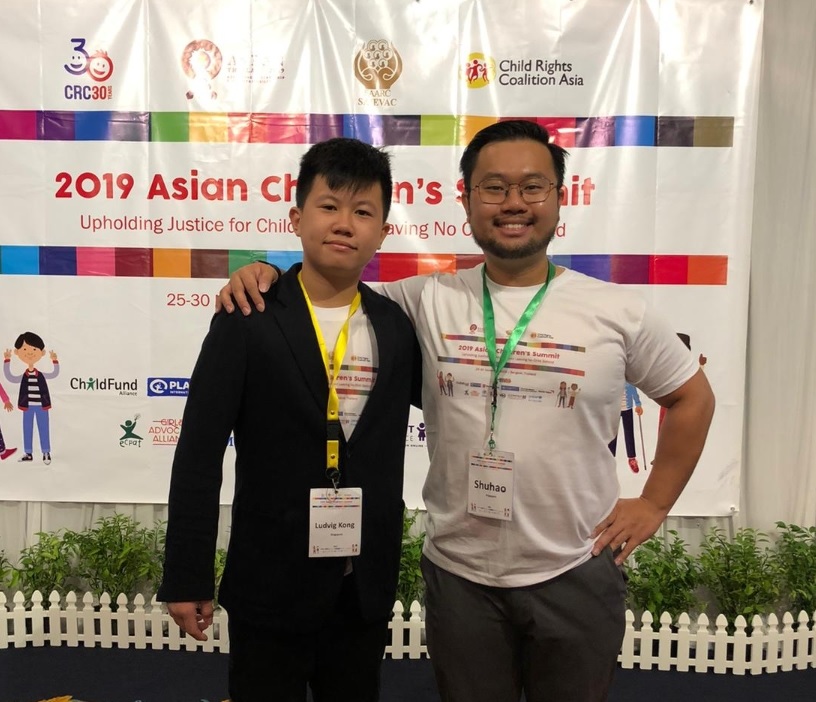 They had worked tirelessly with their mentors and facilitators to prepare presentations on issues ranging from violence against children to children’s right to a healthy environment, pointing to gaps in policies or laws, and making their recommendations on the best responses.

Ludvig, whose team worked on children’s rights in the digital environment, for example, recommended that online safety be formally considered in the UNCRC, and that all regional judicial systems include anti-doxxing laws to safeguard the identities of children online.

The other big takeaway for him were the friendships he forged with his peers from across the region.

His mentor, Shu Hao, said that he drew as much from the experience, especially in guiding Ludvig in the lead-up to and during the event. “It was rewarding… watching him grow as a person,” he said.

Shu Hao said he also enjoyed being able to share best practices in social work with children and youth with fellow mentors, adding that he “gained a better understanding of how social services are delivered in different parts of Asia.”

Article 12 of the UNCRC is the right of the child to be heard. It is one of the guiding principles of the UNCRC and ensures children's meaningful participation in matters that affect them.

Click here to read the story in Chinese. 请点击此处阅读中文版本