The youth from The Fort @ Children’s Society got to surface their inner superheroes at A-FFORT 2019, its inaugural year-end party. And they did not disappoint, showing up at the centre dressed up as characters like Robin, Captain America, and Flash.

And because heroes need to battle villains, the staff gamely took on roles like Joker and Harley Quinn, and even the Evil Queen from Snow White.

Both sides faced off in a number of high-energy games, ending with a game of Captain’s Ball. In between, everyone got to tuck in to a small feast prepared by the villains.

Aimed at celebrating and recognising the contributions of the student-members to The Fort over the past year, staff members of The Fort @ Children’s Society also gave out awards based on the heroic qualities the centre seeks to promote: Competence, Confidence, Connection, Caring and Character. These are based on the Positive Youth Development Framework.

Winners for each category were chosen from nominations that had been made in advance of youth who had consistently displayed one or more of the 5Cs in their time at the centre. 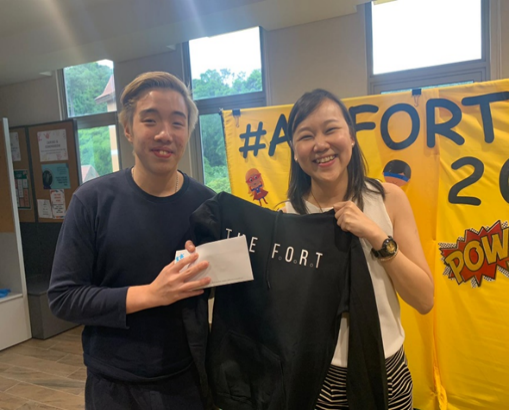 The Fort's friend to everyone, Daron Tan (left), with Ms Rachel Tan, Director of The Fort @ Children's Society

Two Most Valued Youth awards were also given out, to Daron Tan, aged 18, and Muhd Iswandy, aged 16, who had displayed most Cs in their interactions with their centre mates. Daron was recognised for never hesitating to help others, and being friendly and welcoming to all visitors. Iswandy was honoured for being caring and gentle towards the elderly, and being ever-ready to share his knowledge with others.

The prize for Best Costume went to Jeremy Fong, 16, who channelled his inner Boy Wonder and came dressed as Robin.

Congratulations, everyone, on your awards, and for making The Fort a fantastic haven for all our members.