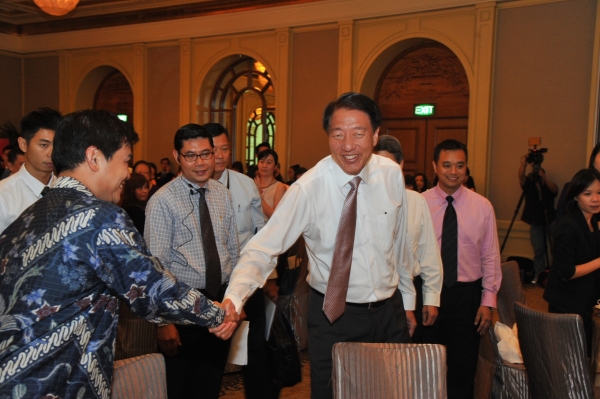 Singapore Children’s Society celebrated yet another milestone for its fund-raising programme 1000 Enterprises for Children-in-Need (1000E): it raised a record $1.808 million last year, thanks to the strong support of the business community.

On 25 March, the Society thanked the 596 leading enterprises and supporting organisations that contributed last year with a 1000E Appreciation Dinner at the Four Seasons Hotel.

Guest-of-Honour and Deputy Prime Minister, Coordinating Minister for National Security, and Minister for Home Affairs, Mr Teo Chee Hean, who is the Patron for the 1000E programme, urged firms to continue to build long-term relationships with welfare organisations like the Society, and encouraged them to rope in friends, business associates and staff to give back to the community.

Said Mr Teo: "The only way a country can grow is if one generation works hard and leaves something for the next."

A further $72,540 was raised during the dinner through the silent auction of nine items, including a piece of Song Nian calligraphy donated by the Society’s Chairman, Mr Koh Choon Hui.

Mr Alvin Yapp, BusAds Pte Ltd’s Head of Corporate Affairs, was appointed as the fourth ambassador of the 1000E programme. His role will to be to rally other businesses and his contacts to support the work of the Society.

Last year, Mr Yapp raised close to $150,000 for the Society through a charity concert.

The 1000E programme encourages companies to pledge an annual donation to the society. Since its launch in 2009, 1,700 enterprises and entrepreneurs have contributed more than $6.3 million to the Society.